If you haven’t read my first edition of arena lighting, check it out here.  It goes over some important background information. So, it’s important that you read it first. Now that you’re all caught up I’ll continue.

Like the team roping photos, I started shooting ambient light. But that’s really not the best indoors because the quality and direction of light is far from ideal. Because it’s so dark in there it’s I’m forced to bump up my ISO even though I’m shooting at f/2.8. I have to use shutter speed to freeze action. Which kills the amount of light coming in. Therefore I’m in the same situation where I need to bring in my own lights.

The good news is that I use so many lights for team roping that I have plenty of options for barrel racing too. They function the same either way. Unfortunately, it’s much more difficult to get them far enough away to light everything evenly because of the inverse square law discussed in the Team Roping Edition. Also, I shoot from a different location for barrel racing than I do for team roping. I shoot from inside the area for barrels. I sit just off the fence near the electric eye on the second barrel side. I shoot with a long lens so I can sit pretty far back which helps get an optimal angle for the classic shot around the second barrel and it’s easier to cross light the barrel racers.

If you read my blog post about lenses you’ll already know that I shoot with a 120-300mm on my full frame 1DX Mark II. If not and you’re interested check it out here. I love this lens because I can shoot further back than I could before when I was using the 70-200mm. It’s also f/2.8 throughout the zoom range and it’s top notch glass quality. I like to give my customers options for different looking shots. As an added benefit, it makes it much easier to create interesting custom collages because we have shots with completely different looks. 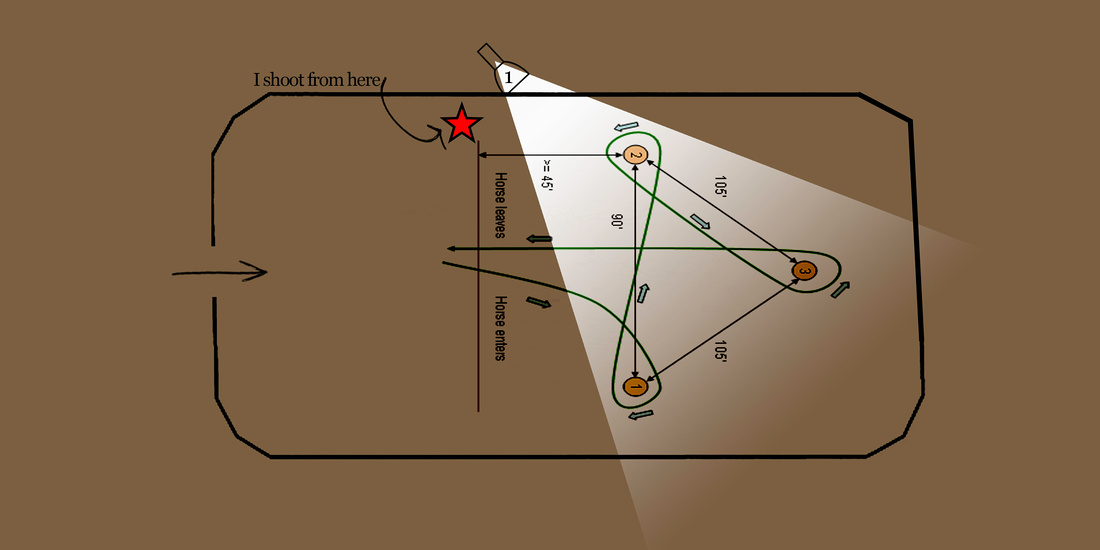 BARREL RACE 1I start by getting the light right for second barrel. 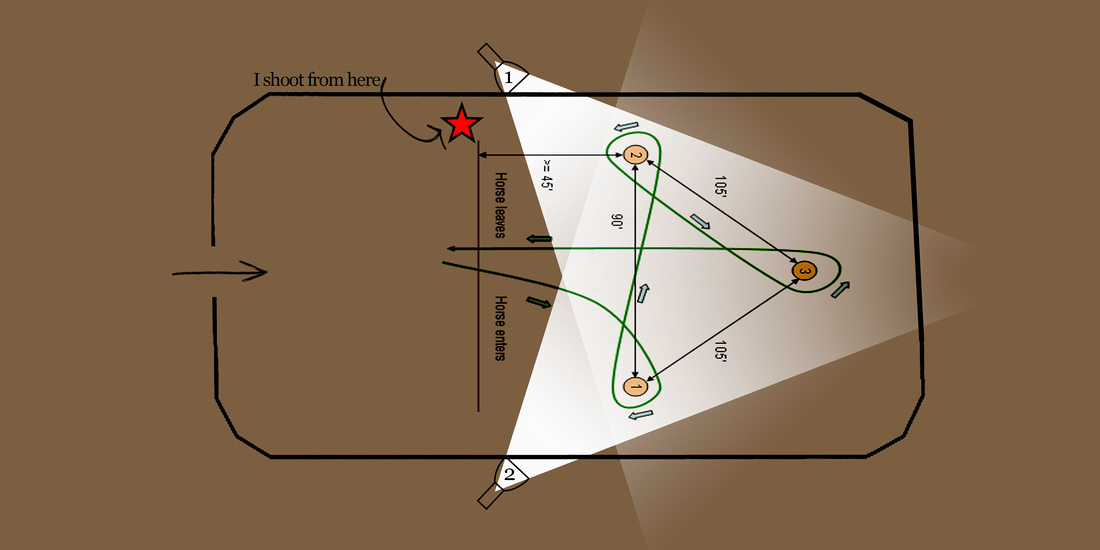 BARREL RACE 2Then the fill light for second barrel. 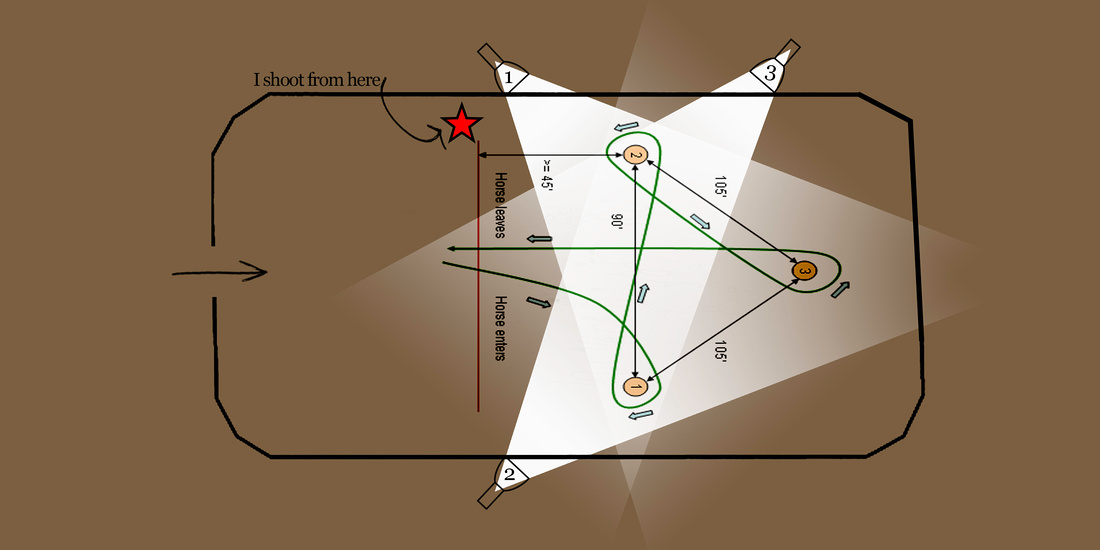 BARREL RACE 3This is considered a 3 point light setup for 2nd barrel.

The third barrel gets two strobes of its own (Strobes 4 & 5). These lights are positioned further down the arena a little further past the halfway point between the first two and the third barrel. These lights light up the background for all the photos, the third barrel shots, and some of the run home shots. That makes five strobes all popping at once. They have a super short flash duration so they are hardly noticeable. 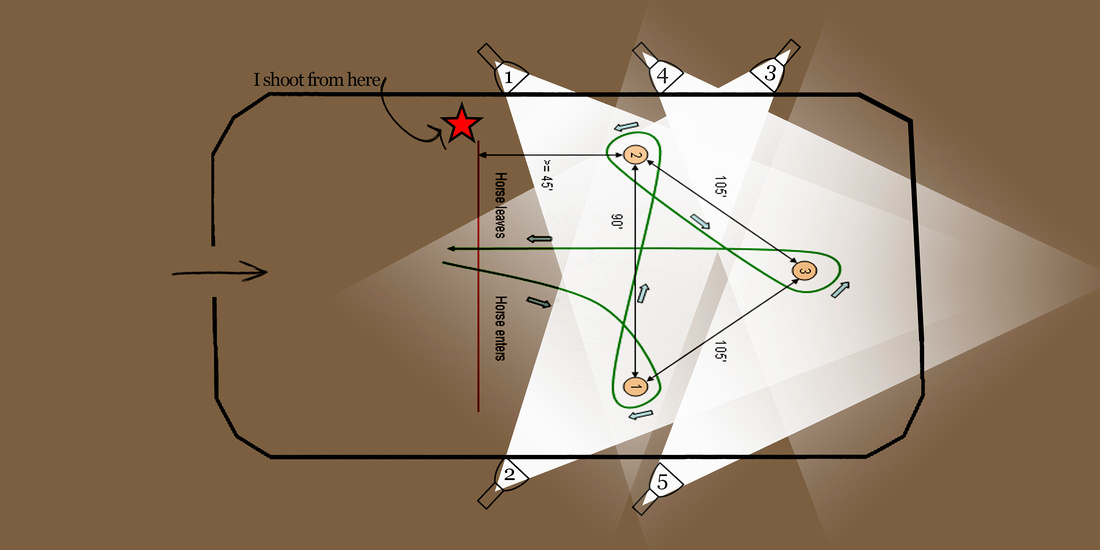 Thanks for reading my blog! It was a super short one today since it was an add on to yesterday’s blog about Team Roping arena lighting. Links to more blog posts at the bottom of the page.

Below are some examples. Hover over to learn more. 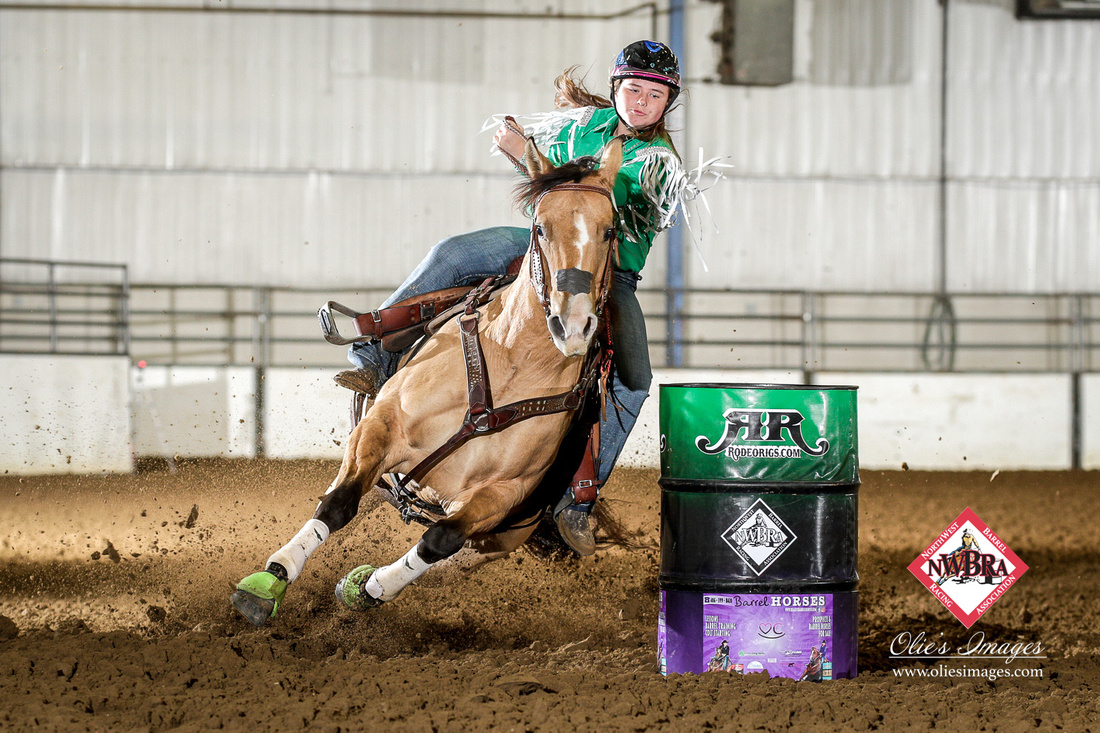 Classic 2nd Barrel ShotYou can see the highlight on horse and rider's right side (camera left). That's from strobe 3. It's a rim light. 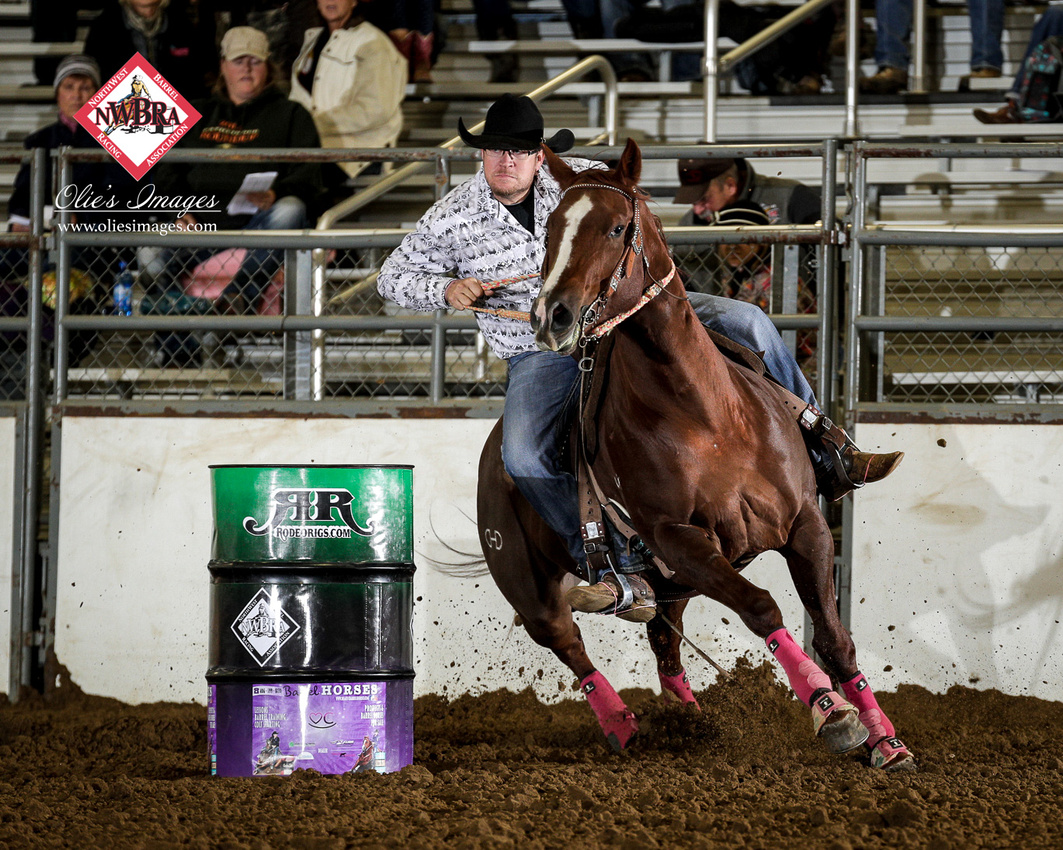 First Barrel Short LightYou can see the key light coming from camera right. If you notice the barrel you can see 3 highlights. One from each light hitting it. 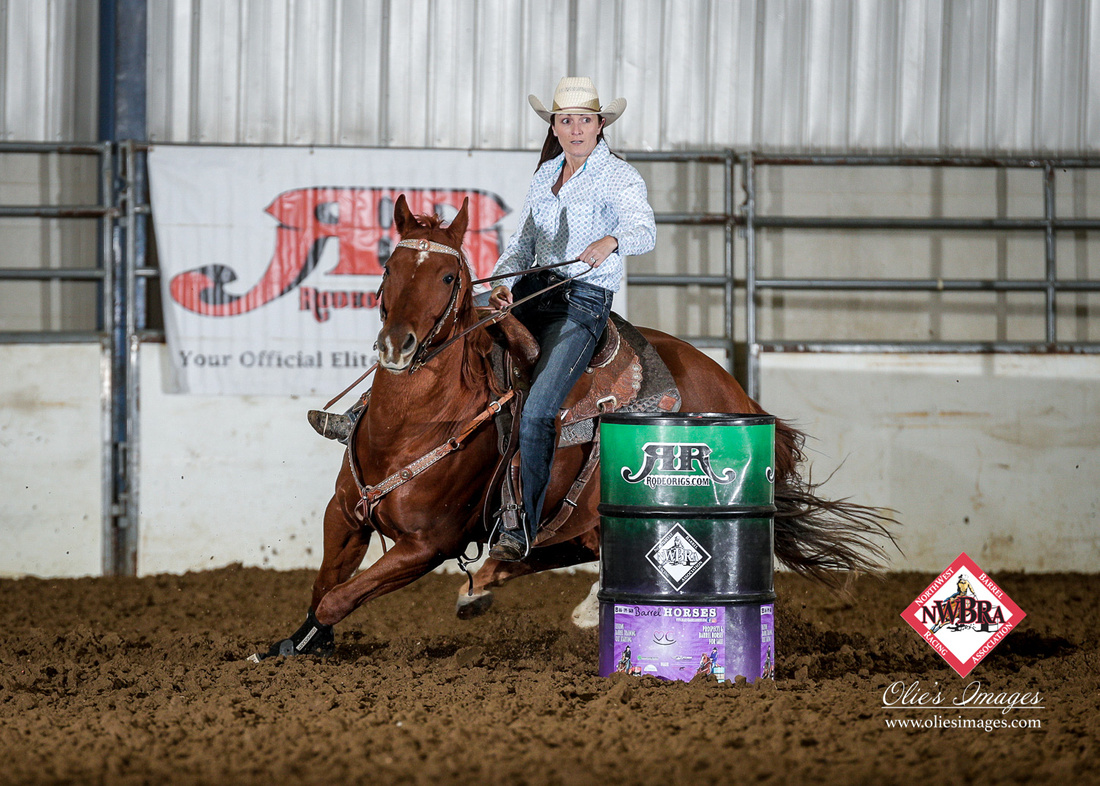 3rd BarrelFor third barrel I'm aiming for a more even lighting setup. For those who don't love the more dramatic lighting. 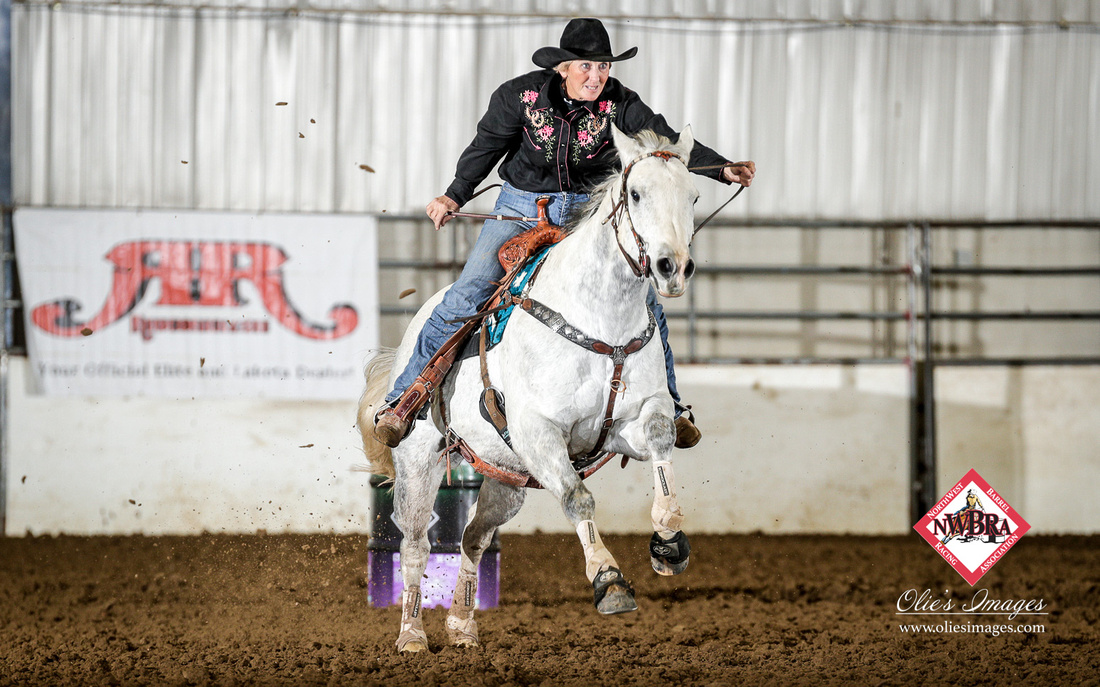 Running Home!Running home shots are in my sweet spot most of the time. Great lighting without any extra effort or gear.

Bonnie York(non-registered)
So glad I found your site. I really need your help on an upcoming barrel race I have been asked to photograph. Covered pen that is open all all sides. If I’m behind barrel #2 I am shooting into the sun, if I’m front of barrel #2 I’m still shooting into the sun. If I use strobe lights as your diagram suggest ( I only have 2) during the daytime will this help me. As that expression goes “ I think I have bit off more than I can chew”. Thanking you in advance for any help you can offer. Actually I’m begging. Lol
Olie's Images
Alysia, thanks so much for the comment on this blog and the team roping one. I've replied to you via email so we can chat about it more. Be sure to check out my other brand, the Equine Photo School at www.equinephotoschool.com.
Alysia Hargus(non-registered)
Hello Olie! I just read your team roping blog as well as this one. So glad I came across these!! I am a photographer in Georgia and struggle with the poor lighting at indoor and covered arenas. I have always had a concern with rider (or horse) reaction to me using lighting hence I haven't and strictly relied on ambient light. But I'm at a point in my frustration with the lighting problems that I have in my results that I'm am seriously considering the investment. I'd be curious to hear of any comments, concerns or feedback you got in the beginning from competitors, particularly barrel racers, or even those in the stands watching at these events.
Olie's Images
Hey Leo, You're welcome. :) Happy to help. I'll be in TX for quite a while. I'm in Springtown at the moment. We will be headed to Stephenville, this weekend for a barrel race. Everything else here is team roping. I don't think this one made it on the list of my upcoming events. If you come to check one out, let me know! If you get there the day before, that's set-up day, and I'd be happy to show you how I set up.
Leo(non-registered)
Thanks for answering and thanks for posting this info up. Helps understand lighting more. I looked at your schedule and see you will be down in Texas next month. Not too far from the events, so might go check some out.
No comments posted.
Loading...
Welcome Video!Thank you for checking out OliesImages.com!