Lighting a huge area is challenging, there’s no way around it. Like most photographers starting out, I had no idea how to use strobes (flashes) to light up an indoor arena. I also didn’t have the funds necessary to buy strobes when I first started either. As time went on and I kept trying to use the lights that the arena has in their ceiling, it was clear to me that I would never achieve the results I wanted with the ambient light found in any of the arenas I was going to shoot in. No matter how well my camera could handle high ISO.

I started saving up to buy my first strobe. That’s right, I thought one would do the trick. LOL, But, before I bought my first strobe I thought I better get a feel for how much time I had between shots. Because strobes need time to recycle (recharge) before they would be able to fire again. Through research, I learned that most have about 1-2 seconds between shots at full power but I could reduce the power and reduce the time between shots. I thought that I wouldn't need that much power. I was using the dim arena lights in the ceiling so surely a strobe would be way brighter than that even at a lower power setting. I had determined through unscientific methods that I only have about 0.5 seconds between shots in some cases. So, I looked for strobes that would have a recycling rate of 1 second at full power then I figured I could just reduce the power by half to get the 0.5 seconds between shots. That worked however, it quickly became apparent that having one or two wasn’t enough.

My first inclination was to put up a pair of strobes at the end of the arena to my left and shoot straight down the arena as shown in figure 1. (Top down view of a team roping arena) As you can see this doesn’t really work for the whole arena. It has a certain ‘sweet spot’ but too far from the lights is too dark and too close is too bright. I tried TTL (Through The Lens) to get the strobes to change their power output to match each shot. In theory, this would work great. But in this case, it was too slow. TTL works by the strobe firing once for the camera to meter then again for the exposure after making an automatic adjustment. This happens pretty quickly for most situations like a photo of a model on the beach. However, it is way too slow for action photography. 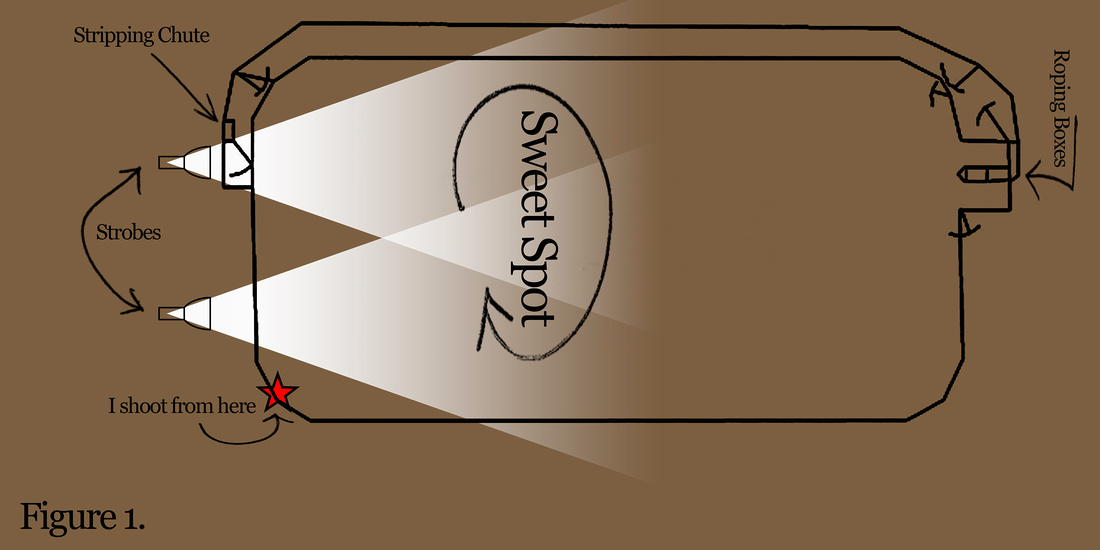 Then I tried HSS (High-Speed Sync). This means that I can increase my shutter speed to freeze the action of the ropers just like I was with the ambient light. I was just trying to use the strobes with the same camera settings that I was using before but just lower my ISO a bit. In theory, they should work great. However, HSS kills the power output of the strobes by a ton. Even at full power, it wasn’t even close to enough.

Neither of these solutions was getting me the results I was after. I needed more light because I had an idea that would require a bigger investment. This was about the time I started to go back and study the inverse square law. This describes the rate of light fall off from a point source. Figure 2 and 3 below are made by Elixxier but I found them from PetaPixel's article about Understanding the Inverse Square Law (link here). They show graphically how the inverse square law from physics affects the light coming from my strobes. This made it clear to me that I was trying to light from the wrong side of the arena. It also shows why I was struggling to get the background bright while keeping my subject properly exposed too. 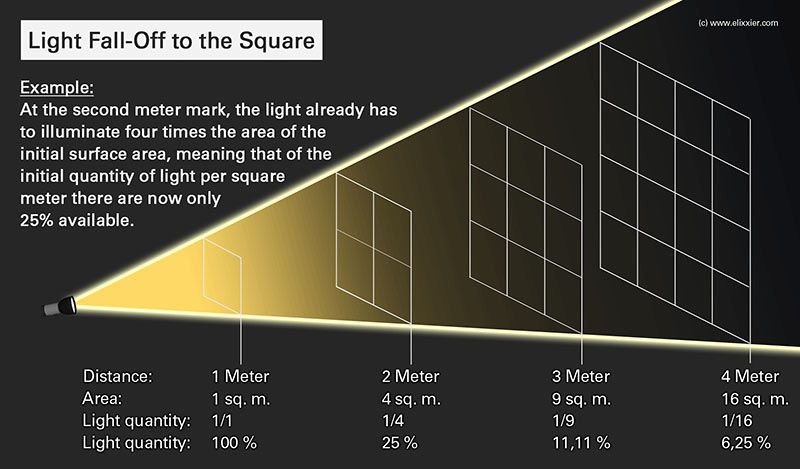 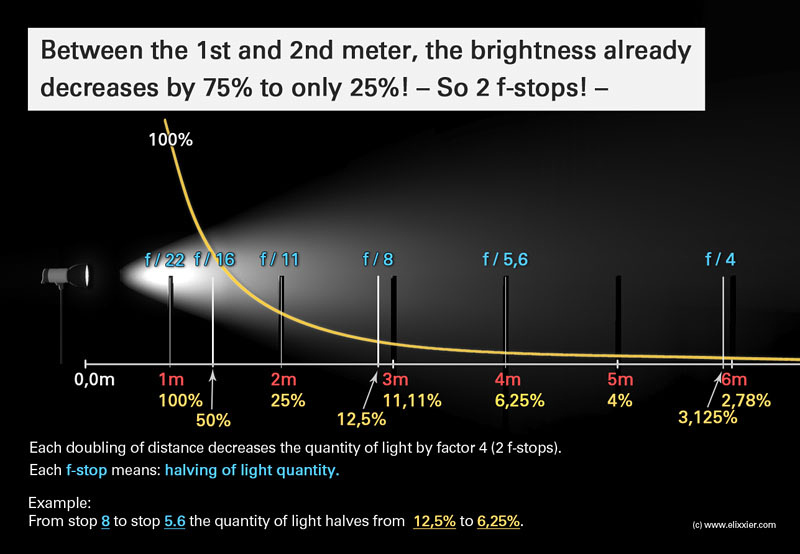 You’ll see in Figure 4 a top-down view of an arena. I sit in the corner opposite the heeling box. I have these lights set up in a “cross light” formation. This means the light is more or less 90 degree from my camera depending on exactly where they are in the arena. I like this setup best because it gives me the largest sweet spot possible. As you saw in Figures 2 and 3 above it best for me to have my strobes further away to get the biggest sweet spot in the arena. 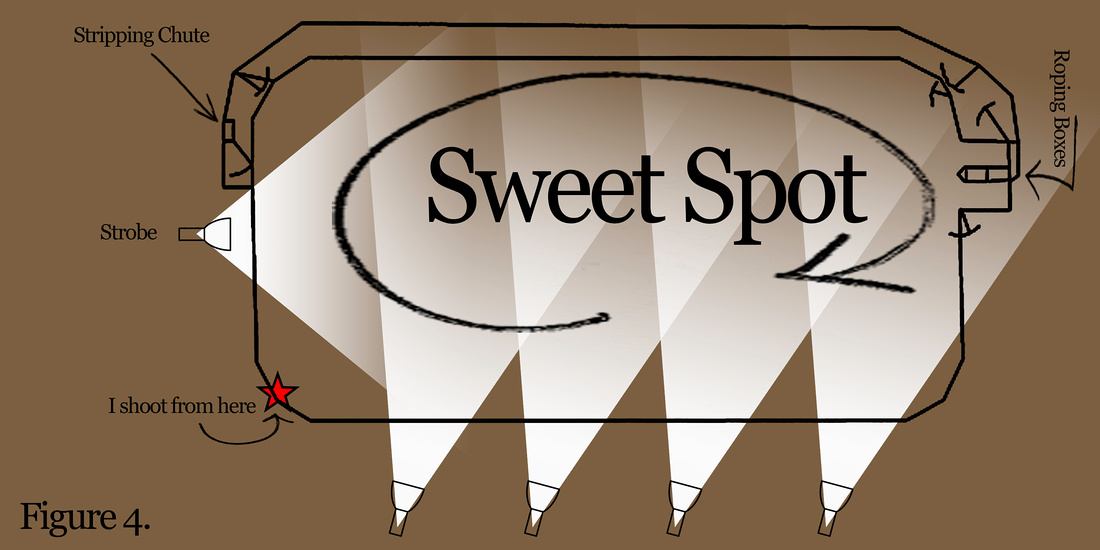 I still had more obstacles to overcome. The first pair of lights I had were way too slow to recycle. I found that Profoto D2 strobes had a recycle time of 0.6 seconds at full power. That’s exactly what I needed. They are 500-watt second lights which is plenty of power in most cases. The Profoto D2’s also have a feature called a Zoom head. This allows me to adjust the angle that the light spreads from the strobe. These are just what I had been wanting the whole time.

Another problem I had was that I didn’t understand how I could use my max sync speed of 1/250th of a second to freeze action. Typically a minium of 1/800 is requred to get pretty close to frozen action. With a little research, I realized that my strobes fire as fast as 1/60,000th of a second. That’s way overkill but that’s all I needed to know. I just needed to shoot with settings that would be about 3 stops of light underexposed then use the light from my strobes to bring the exposure up to correct. Luckily for me, this is super easy with the D2’s because of the Air Remote. The Air Remote is the device that sits on top of my camera connected to the hot shoe. I can use it to adjust the power level of the strobes. So, when I’m setting up the strobes all I have to do is get them in the right position and then sit down with my camera and adjust the power after I’ve determined what settings I need. If the light changes for some reason I can adjust for that too without having to leave my seat. For instance, when we shoot in an arena where lots of sunlight can come through I will lower the power of my strobes when the sun goes down.

Below are some example images to show you how the light looks using this cross light with a fill light. You can see that the background is still exposed properly as are the ropers, horses, and steers. Shooting cross light helps to show details in texture and gives my images a 3-D look to them. I get quite a few comments about how sharp my images are and how the ropers seem to jump out.

Thanks for reading my blog! Check back in later to see how I set up my lights for barrel racing. If you have any questions or need something cleared up, let me know in the comments! 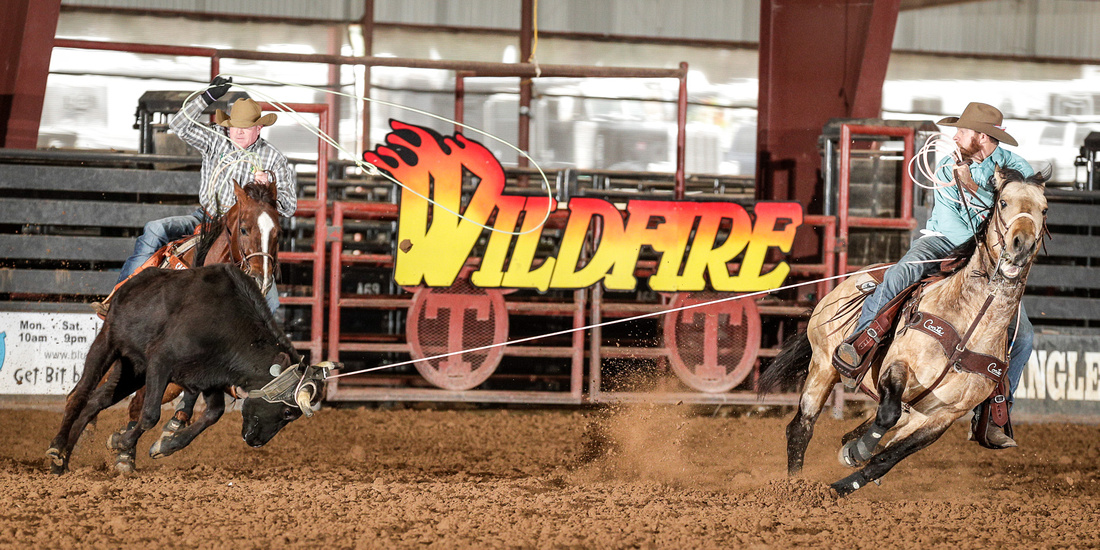 Wildfire RopingThis shot is perfectly in my sweet spot. You can see there's enough shadow to define. They are properly lit. 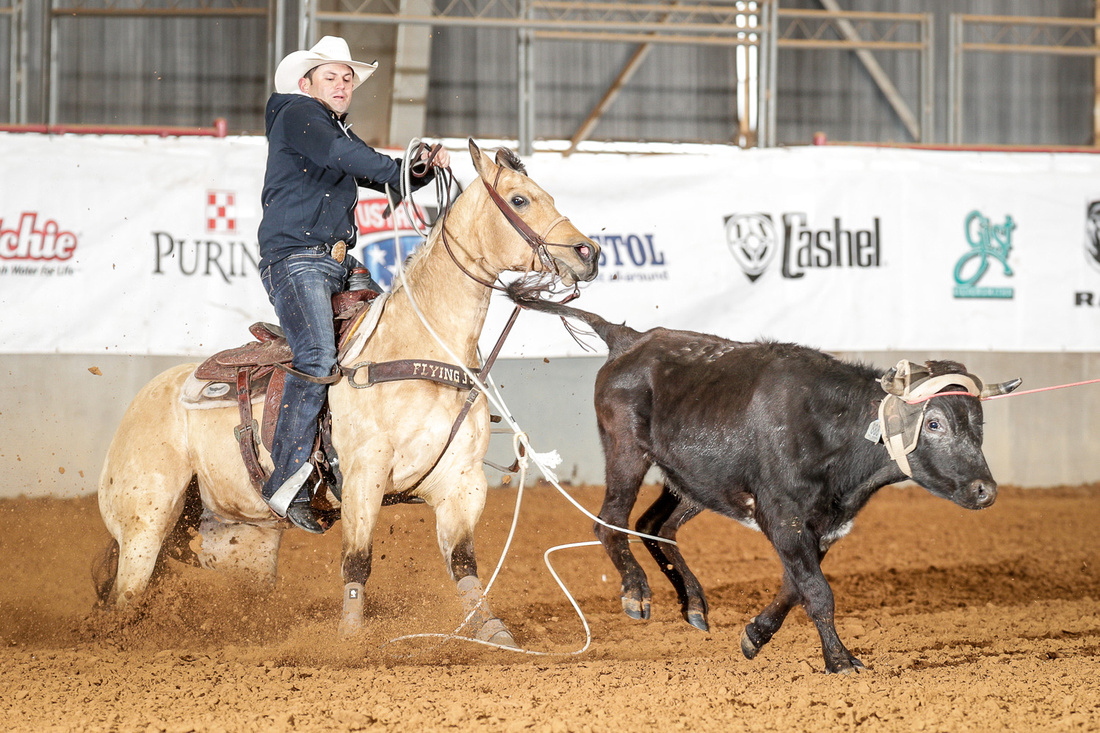 Brazos Valley ClassicHeel shots are so often in my sweet spot because of the flow of a team roping run. 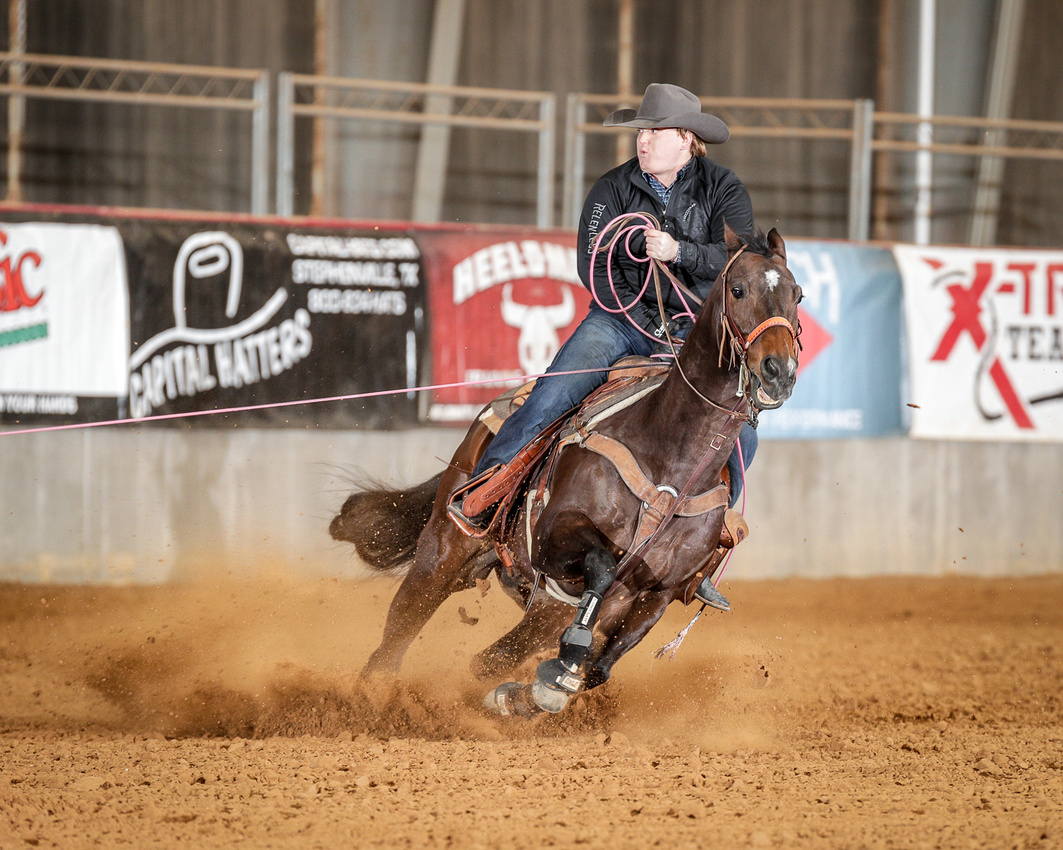 X-Treme Team RopingYou can see the light is brighter on the right from the key light but the shadows aren't too dark because of the fill light. 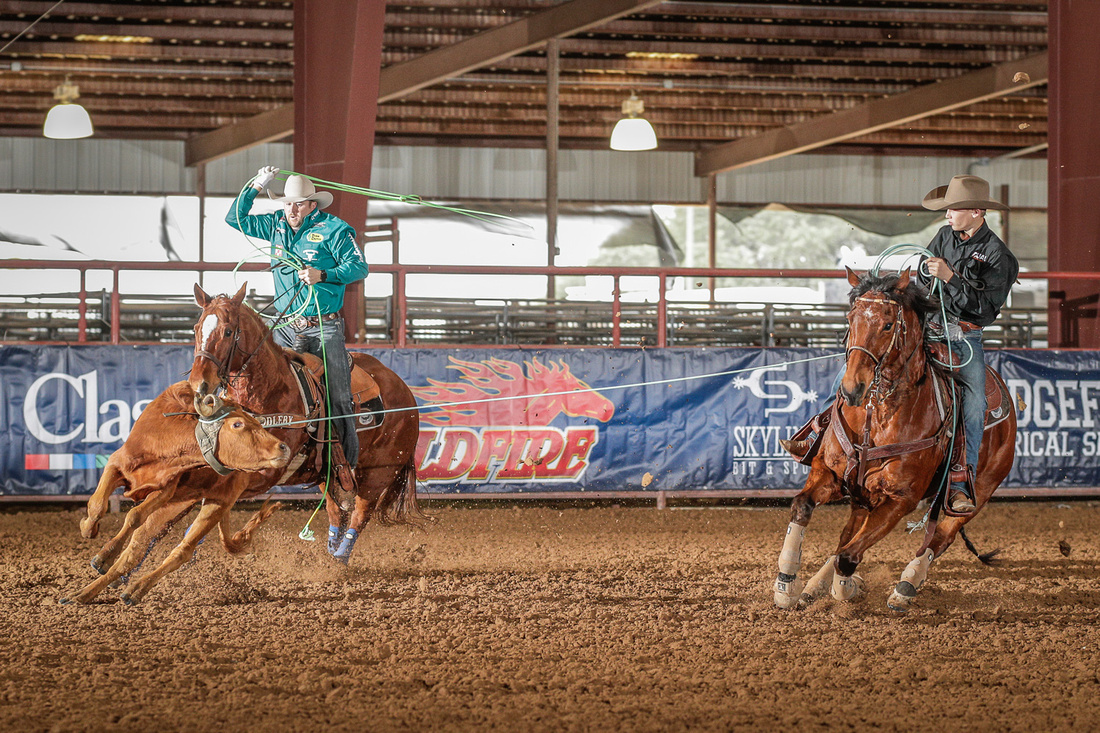 Wildfire RopingYou can see the brighter light is coming from the left here. This is near the end of the arena. The fill light has become the key light.

Pete Knutson(non-registered)
Thanks for posting! I'm just starting to think about buying and using strobes.
Sally Bruen(non-registered)
These people at the PCM.daily have starting late picked the most ideal approach to manage mock their PCMNorge accessories. Visit http://www.sentencecorrector.biz/how-to-check-sentence-structure-in-a-business-correspondence-letter/ to read a wonderful idea. Their decision movement has furthermore pulled in me.
Sally Bruen(non-registered)
Truly, I have no clue about getting another welding position for me since I am new to this field. Check this http://www.punctuationapp.com/15-amazing-punctuation-apps-for-android/ to do your work in time. I'm listening mindfully to all recommendations and rules.
Olie's Images
Dianna!! I'm so glad that this made sense! It could certainly be confusing to many people. If you'd like more, I've decided to stop posting here but I've created a new website dedicated to teaching equine photography. It's called Equine Photo School at www.equinephotoschool.com. There is a weekly podcast episode too. I'll be moving this content over there as well.
Dianna(non-registered)
Oh my gosh this all makes sense now! I have struggled with strobes and making sure right settings for them to get the look I wanted. And this blog post totally made sense of what I’ve been doing wrong! Thank you!
No comments posted.
Loading...
Welcome Video!Thank you for checking out OliesImages.com!